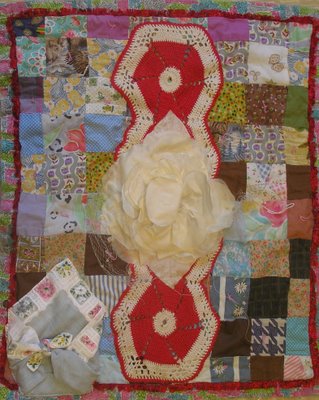 You might remember this folk art assemblage quilt I had pieced together a few posts back, having been inspired by the work of Janet Cooper.

I finally began to permanently assemble it, but in order to do so I first had to remove all the assemblage pieces so that I could start to sew the foundation together.

I started with a border of red eyelash trim around the old doll quilt. If you look at the original photo, you won't see it, I hadn't planned to use it before, but as I put it together I knew it needed to be included. Just that tiny embellishment made the quilt come alive visually.

Next came the red and white doilie down the middle, then the vintage linen hanky with its fresh Spring like border. I have folded it to create a little pocket. 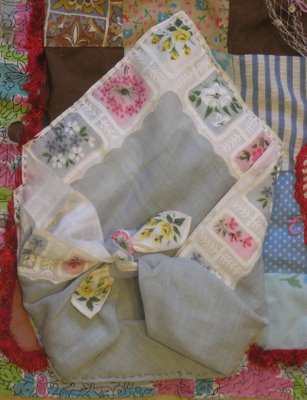 And finally the centerpiece is some sort of odd ladies hat. As much as I am delighting with the way it looks here on my quilt, it amuses me to think of this on somebody's head. 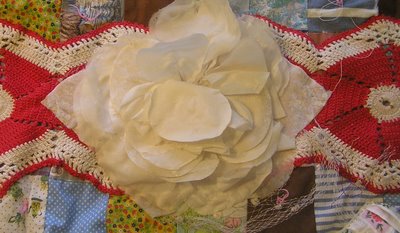 As I started to sew the foundation together I began to think about all the pieces I had to remove in order to start. Even though the quilt looked finished in the photo I took, it would not have held together if it was moved. It made me think about how much, once again, my art was hinting at what was happening in my life.

When this season of storms began for my husband and I, I "happened" to hear a radio program in which the speaker said "Sometimes God will allow everything we rely on to be stripped away in order to teach us to only rely on Him." And that is what has been happening ever since my husband was laid off from his job.

One by one God has been loosening my grip on the things I believed were my security, the things that I could count on in my life and as I recognize what has been happening, I realize that He isn't finished yet.

I believe that not only is He teaching me to rely on Him alone, but He is showing me that while my life may have had the appearance of being put together, nothing was securely attached. The foundation wasn't solid enough and if He had answered the prayers I have been praying for Him to answer, we would not have held together. It sounds backwards, but He has to take it all apart in order to put it together the right way.

As I attach each piece to my quilt, it becomes more and more beautiful to me. When I am finished it may look a lot different then I first envisioned it. I'm betting it will look even better then I imagined it.

The Long Arm of My Love

This art was inspired by and is dedicated to my online art friend Reverend Carol Maclaren.

In response to the many hardships my husband and I have been going through for many months now, Carol sent me a major blessing just before Christmas, and with it she wrote that the Lord had told her to tell me that His arm isn't too short to help me.

I wrote Carol my thank-you's and told her that I felt the tide was turning and surely her gift was a sign. I wrote the same thing here on my blog a few posts back, that I felt that this season of storms was coming to an end. I was wrong. Shortly after that post things seemed to turn from bad to worse and this time I completely fell apart. I was under so much stress from it all that I broke and wound up moving out of the bedroom and sleeping on a mattress on my studio floor for over a week. Neither my husband, nor I was willing to reach out to the other. The enemy must have been having a heyday with that.

But Carol was right, the arm of the Lord is long, and He is more then able to reach into our lives and save. He worked His love in our hearts and brought us back together and has renewed our strength to face another day. 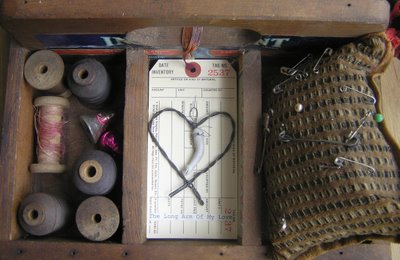 This piece is based on the scripture from Isaiah 59:1 "Surely the arm of the Lord is not too short to save."

No not too short to save. He sent me encouragement all the way from England through my friend Carol. I'll be sending one of these heart danglies out to her on Monday along with one each to the ten women in one of the two Valentines Day swaps I'm participating in.

Both swaps are heart themed but I can't show you what I've made for the other one until after mine have been opened by the participants on the second day of February.

I'll be posting directions to two different projects here in February so be sure to check back.

Whats on your work table? 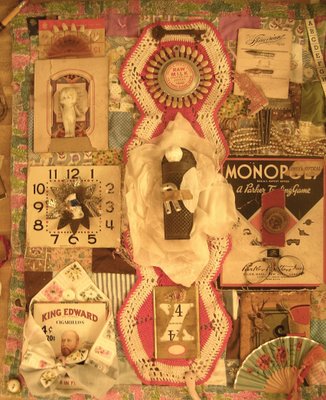 Not my entire studio, just on my work table. This is what I've been tinkering with since New Years day. With the exception of a few minor details, its all laid out and ready for me to start permanently assembling it. Bad lighting but you get the idea.
So what's on your work table? Leave me a note and post a picture on your blog.
Posted by Unknown at 1/04/2007 07:07:00 PM 10 comments:

Ringing in the New Year Playing With Art 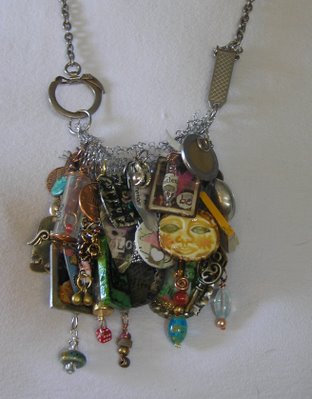 This is a pretty bad picture of a really cute necklace that I FINALLY made from the 25 charms I received in the "Just Simply Charming" charm swap.

Its hard to tell but the charms are all attached to a pouch I made from the end of a wire mesh lint sock. The chain is a vintage watch fob. It clasps in front.

I wore it all afternoon and it creates the most awesome jangle when I move. Little pieces of art all swinging around my neck together. Music to my ears!

It makes me think of the scripture "Where your treasure is there your heart will be also." Luke 12:34

These little charms truly are a treasure to me. Art is my passion and I have such limited time to spend on it, but today I have had the opportunity to spend many hours playing in my studio. A great way to start the New Year!