Make Mine A Double 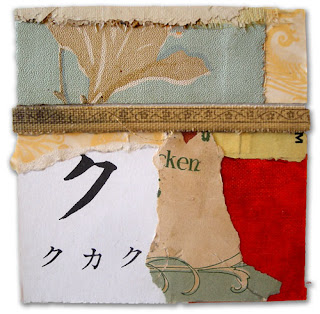 Many times, while working on a piece, a word or phrase will begin to form in my head and press in on me as I work. Sometimes it will come to me after a piece is finished - occasionally something will press on me that does not make any sense or seem to have any context in my life until some spark of recognition reveals the message behind it.

For nearly six months a phrase has been popping into my mind with no relevant explanation what-so-ever except maybe to annoy me.

I've learned over the past few years to tune in when this kind of thing happens and really listen - most often it is the voice within that wants to be heard - many times it is something I know God has for me. But this phrase just seemed to make no sense.

"Make Mine A Double"? Seriously? What?

I do enjoy a good gluten free beer or margarita with dinner now and then. And I've made my share of jokes about needing a drink, but nothing from this phrase made sense in any serious capacity.

Yet it persisted with increasing frequency - waking me sometimes in the middle of the night. Just those four little words springing from the recesses of my questionable conscious -

"Make Mine A Double"

I pushed the phrase away and ignored it. but there it was again.

And as good as I'd like to think I was at giving it a listen, I just wasn't getting it. And perhaps just wasn't ready to hear what it had to say. DISMISSED! I told it - but no. Here it comes again -

About a year and a half ago I came in from an early morning bike ride with a sore throat - the kind that announced you were about to have a good case of strep. At least that is what I thought it was telling me, strep being one of those annoying viruses that liked to plague me, and having been long over due for a round of it.

But as I pulled on my throat in the bathroom mirror I found a lump in my neck.

It was determined to be a non-cancerous thyroid tumor, most likely a result of my fickle auto-immune system, and it would eventually need to be removed, but without insurance the doctor asked me not to return to his office. "You wouldn't go buy a car without money would you?" he asked over the phone, just after delivering the news from my biopsy report. But I wasn't trying to buy a car.

Funny how when you are learning new skills these things happen to help you flex your new muscles. I was, and am, in a season of uncovering my hidden true self, finding my voice, and becoming the woman I was intended to be. But this one took me by surprise, leaving me deflated and unable to form words.

There was a second doctor, whom I visited on referral due to his willingness to treat me without insurance, well suffice it to say I should have reported him, and sparing you the details it is enough to say - yuck! and off I went with my tail between my legs feeling wimpy and happy to put it all out of my mind and get on with my life.

And get on with it I have, pushing on through many trials and developing new skills, learning to speak up, and seeing certain dreams begin to come to fruition.

But then there was that pesky tumor. It eventually didn't like being ignored and started to grow. Pushing its way into my priorities until it couldn't be ignored.

This time the doctor was a kind, compassionate and very skilled woman, in such popular demand it took 4 months to get in - but the timing was just perfect as I sat down the week before and prayed "God you know my need and my circumstances I have no where to turn" and that afternoon the phone rang with an approval on insurance - the card arrived the day before my exam. Praise!

A new ultrasound has revealed that the tumor seems to be sitting next to my thyroid rather then in it. Other factors have raised the level of concern for what this tumor may be. A biopsy is scheduled today to answer questions and I spent a good couple of days rolling the waves of new emotions and fears.

I woke early in the am a few days ago staring into the dark and I heard it again. Pushing its way in where I had asked it not to go.

"Make Mine a Double"

Too weary and full of lifes concerns, this time I asked "What are you trying to tell me God?" And with that I knew in the depths of my soul God brought it to me.

I had asked for a double portion.

“Let me inherit a double portion of your spirit,” 2 Kings 2:9

Sometimes we pray the most earnest silly naive things. Sometimes God answers in ways we couldn't have imagined. But as soon as he reminded me of my prayer he brought me to Isaiah 61:7 -


"Instead of your shame
you will receive a double portion,
and instead of disgrace
you will rejoice in your inheritance.
And so you will inherit a double portion in your land,
and everlasting joy will be yours."
And once there, I knew the entire chapter was where he was asking me to dwell through all of this, especially here (emphasis mine):
"The Spirit of the Sovereign LORD is on me,
because the LORD has anointed me
to proclaim good news to the poor.
He has sent me to bind up the brokenhearted,
to proclaim freedom for the captives
and release from darkness for the prisoners,
TO PROCLAIM THE YEAR OF THE LORD'S FAVOR"
And here (emphasis mine again):
"They will be called OAKS OF RIGHTEOUSNESS,
a planting of the LORD
for the display of his splendor."
And finally here:
"They will REBUILD the ancient ruins
and RESTORE the places long devastated;
they will RENEW the ruined cities
that have been devastated for generations."
And so it seems he has been preparing me for this for some time. A year of the Lord's favor. I'm ready Lord.

Time To Get Your Wax On: EncaustiCamp Registration Begins!

It is official! EncaustiCamp registration has opened~ Sign up now for your own grown-up summer camp adventure! Leave your cares behind for 3 full days and 4 nights of instruction, July 13-17 2011, while soaking in the beautiful Oregon woods!

Artist Patrica Baldwin Seggebruch, author of Encaustic Workshop will be hosting, as well as teaching at this exciting event. There will be something for everyone from the novice to the most experienced artist to learn as Patricia is joined by myself, and 4 other artists, each sharing a behind the scenes look at our own encaustic techniques. In Patricia's words: "This retreat is about going beyond the borders of encaustic art and opening welcome arms to the art and craft world at large so as to expose the beauty, versitility, accessibility and intense pleasure of this multi-media friend to all walks of artist, crafter, experimenter."