"Make objects that talk and then listen to what they have to say."
~Art and Fear 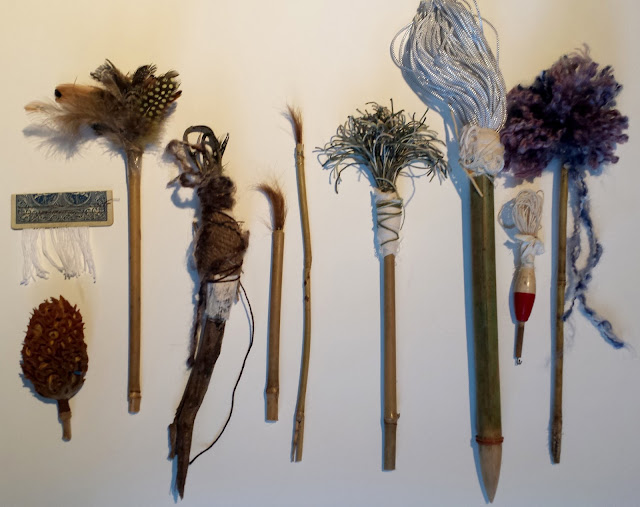 With the holidays over, my energies are turning to welcoming you all into my new space. This studio is excellent for hosting workshops. I've set up the tables to allow everyone a seat with plenty of elbow room and we all get to gather as a creative community. No one left sitting in the back of the room or facing somebody's backside in this space. And the more the merrier - I've got two more tables to add to the mix without compromising on space or friendship connections. 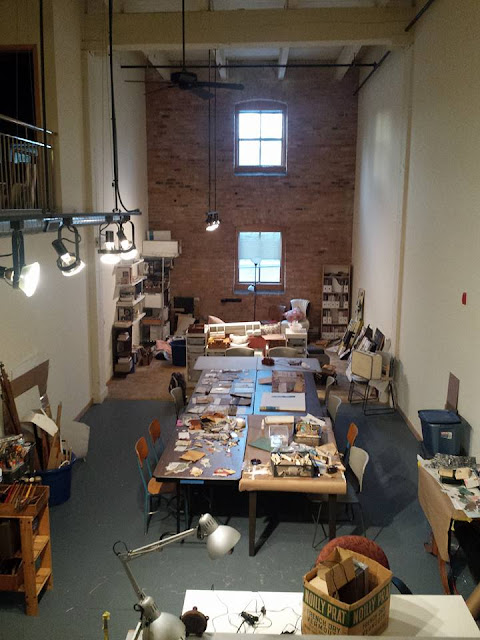 The first class is shaping up to be one of my all time favorites. I have been playing with new designs for handmade brushes and tools and can't wait to share them with you in "Brushmaking and The Art of The Mark, with Collage." 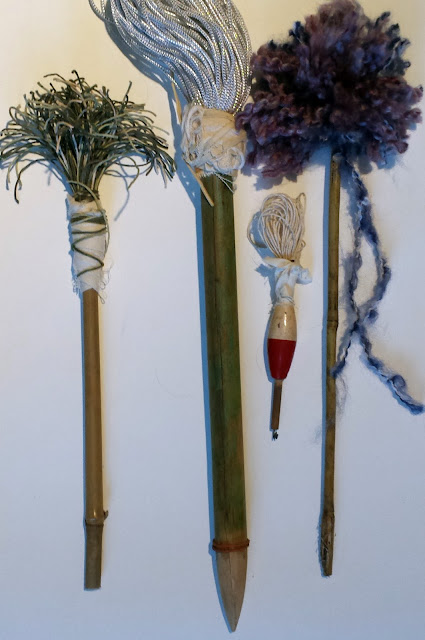 Now because it is so fresh on the heels of the holidays, and because we are all still recovering our schedules and finances, this workshop has been set up as a one day class with an option second day. 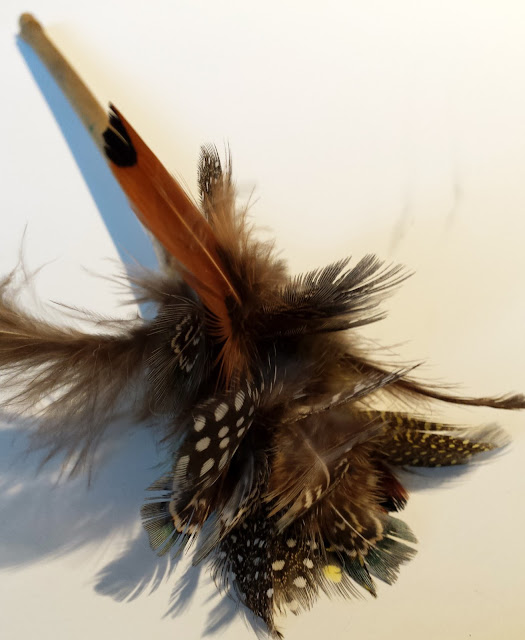 The first day will focus on those brush and mark-making tool designs I was telling you about. Check out all the samples I've made for this class! Think of it as an assemblage class for mark-making tools. As a matter of fact, I am contemplating incorporating my new tools into my box assemblage samples that I'll be using in February's class! 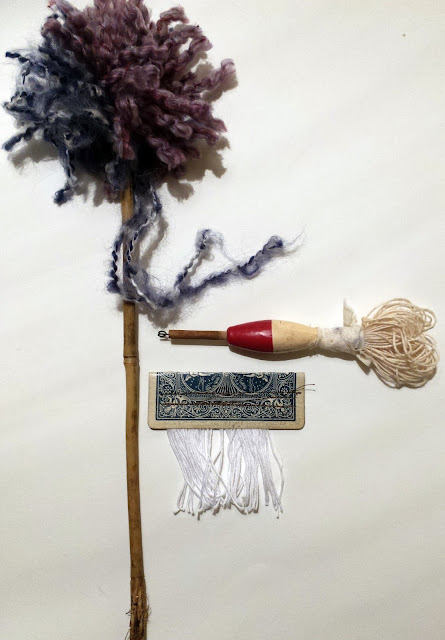 Think that sounds like fun? The second day of class only gets better - bring back the papers you made with those newly created tools on day 1, and I'll show you how to turn them into a beautiful collage. The morning will focus on learning the art and techniques of collage and the afternoon will be open studio format with the opportunity to have me at your side answering questions and using class supplies as you work. 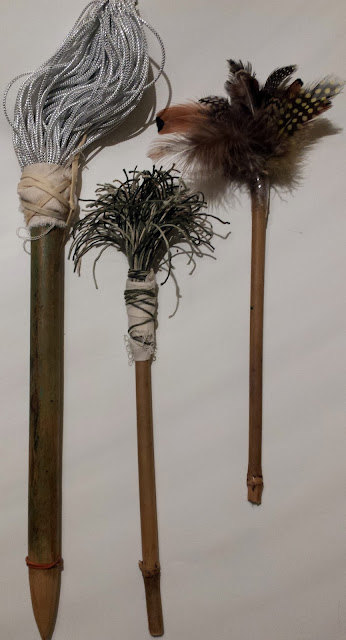 I do hope that you will consider joining us. It may be cold outside, but making art keeps it cozy in the studio! Head on over to this link to find out more details and register for the class. 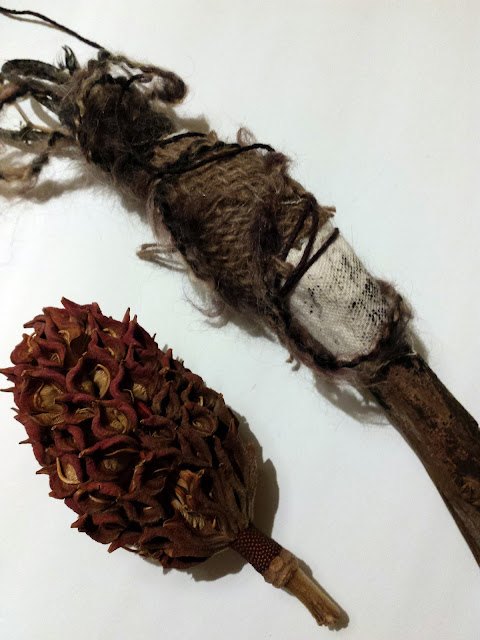 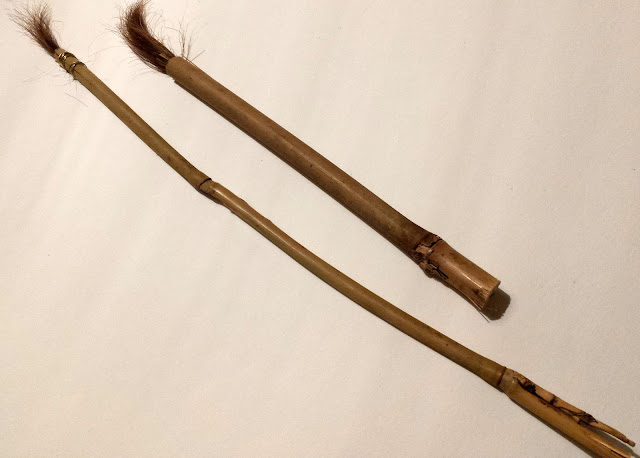 On Facing Your Fears and New Year's Resolutions

“Courage is being scared to death, and saddling up anyway.” ~ John Wayne

A wise woman once told me that the way to get over a fear was to face the thing you were afraid of and realize you didn't die from it when you get to the other side.

As a sufferer of complex-PTSD I have a lot of practice with this. Wired from a childhood game of “watch the drunk man drive”, I lean hard toward the hyper-vigilant codependency, laced with a side of anxiety frame of mind.

Face the fear and do it anyway. Sage advice and very effective in getting things done. I've tried to live this mantra and have many accomplishments as a result of not letting fear limit me. But in the annual thinking of new goals for the year ritual, I've come to realize that this way of living, while allowing me a certain level of success, isn't really doing me any favors.

Instead of taking an ax to the root of the issue, I've been facing each fear like it's some sort of sumo wrestling match. I get into the ring with my fear, we stomp our feet at each other, noses flaring eyes bulging and start rolling around until one of us comes out on top. During times of high anxiety, it's more like a football game and I'm the only person on my team. I put on my helmet, clutch the ball, put my head down, and barrel my way through the line. Some days I score and others I am squashed under a heap unable to get up.

Always, always, fear has the power and I am the 90 pound weakling looking for a way to trick fear into looking the other way while I slip by unnoticed. Or to hell with it, just throw in the towel and retreat into myself and avoid life altogether.

Now before you get all judgey on me, or start writing me letters to cheer me up, I know I haven't corned the market on harboring fears. Fear is an insipid sneaky little devil that doesn't show up at your door announcing itself as fear, waiting for an invitation to come in. Much of what is wrong in our individual lives, communities and society stem from unacknowledged fear.

Fear is a loner. It travels at night, sneaks into your dreams and convinces you it is real.

Fear doesn't trust you to find your own way. It weaves itself in and out of your thoughts through familiar voices. It can disguise itself as the concerned advice of a friend.

Or convinces you that you are just being a friend when you dole out your own brand of unsolicited advice and try to fix other peoples lives.

Fear is a master of disguise.

Fear is a manipulator. It leaves books laying on the coffee table and articles pinned to its wall hoping you'll read about your problem so you'll come back to your senses.

Fear tells you your boundaries are unreasonable and your decisions are unsound. Fear says you took the easy way out. It cries for you in front of others and makes you question your own sanity.

Fear says you got what you deserved.

Fear is more concerned about warning you than hearing you.

Fear tells you you are different. And it has already taught you different is bad.

Fear thinks you dress funny and pretends to be amused while warning you that leggings aren't pants, and lifting that eyebrow that says “you are going to change, aren't you?!” Because fear doesn't want you to express yourself. Or have any fun.

Fear subtly corrects you when you speak. Fear keeps you quiet when you have an idea because you might not say it right. Fear laughs at your grammar.

Fear tells you that you are too sensitive when you call it on its behavior. Because fear does not know how to apologize.

Fear is afraid you can take advantage of Grace. Fear thinks if you're given an inch of grace you will just go crazy and take an entire mile. Fear doesn't understand that Grace knows exactly how much you need and will even go the extra mile for you. Fear doesn't trust Grace.

Fear doesn't want you to eat the chocolate.

Sometimes fear tells you to hurry up and eat all the chocolate.

Fear doesn't think there is enough for everyone. Fear has a scarcity mentality.

Fear tricks you into believing you don't measure others.

Fear believes absolute truth justifies black and white thinking. There is no gray area with fear, let alone room for all the amazing colors of the rainbow. Fear says if you are right then it has to be wrong.

And fear is never wrong.

Fear disguises itself with the American flag, has an Alma mater, and is fiercely loyal to the team even when someone else has been wronged.

Fear stops you from taking real action that can make a real difference because fear is comfortable and doesn't take risks. Fear numbs out in front of the TV.

Fear won't look at itself and doesn't want you to look at it either. Fear is afraid of your emotions. Especially the negative ones.

Fear doesn't want to sit with you through it. Fear only wants to tell you what you should do.

Fear tells you not to talk about it. And for heaven's sake don't write it on your blog! Fear tells you that talking about it is a weakness and a downer and not productive.

Fear says you just want to stay stuck in the past when you should be forgetting it. Fear says that means you harbor unforgiveness and have a victim mentality.

Fear disguises being afraid of others, of the world, and even yourself, as values. Fear convinces you that things cannot change. That they will only get worse. That you cannot make a difference. That you need to protect yourself with weapons, build really big walls and put bullies in charge.

Fear wants you to stay with the bullies. Fear is a bully.

Fear tells you that bullies can't change. Fear says you shouldn't expect them to.

When you really stop to face your fear, you find that it is often nothing more then Donald Trump in a fat suit. A blowhard with really bad acne and greasy hair growing more powerful and full of itself every time you listen to its hateful rhetoric.

Fear wants you to believe it has all the power. Fear will convince you that you have none.

Fear will twist your words about power and say you don't trust God, because you should cherish your weakness and let Him be strong.

2015 was a year that opened my eyes to just how much I fear. It came in large and shame inducing ways, it whispered its subtle lies in the middle of the night, and it pointed its finger from across the street. I've wrestled with it, I've run from it, shrunk from it, numbed out, checked out, and faced it head on and done the things I needed to do anyway.

White knuckles on the wheel all the way baby!

I have viewed fear as the opposition and me as the weaker party. But is that really true?

What if fear is here to teach me? Maybe fear really needs me to listen to it. Maybe fear keeps flaring up because it is afraid.

What if, instead of putting my head down and barreling my way through my fears, I take them all out and hold them in my hands and have a good long look at them? What if I put my arms around my fears and hold them tenderly and tell them it is all going to be okay?

I don't want to live an undivided life anymore. Putting on a brave face for all the world to see, all the while fighting this bloody battle to the death behind the scenes. I don't want to hide myself from fear, or from you, or from myself anymore.

I am not naive enough to think that this revelation will make it all disappear overnight, but I think there is something to this kinder gentler way of dealing with my fear. Of remembering my own power and looking at fear with curious eyes rather then fighting it back with more fear. And so this is my new year's resolution: I will own every part of me. It all matters and is all valuable to the whole of who I am. I will allow myself to face fear with the same love I would offer a friend. I will hear it out and answer it with reassurance and a hug.

I don't know for sure, but I suspect this is what I have been missing in this formula on courage and fear; Facing my fear, yes, but facing it with love. And facing myself in the same way.